Early summer between May and June are excellent times to visit the 1000 Islands. There are virtually no lines and the Islands are lush and green, flowers are in bloom making you feel like you have this slice of paradise almost to yourself.

July - September is the peak season with many special events and lots of local action. There is the popular and entertaining Seaway Splash, a dock-jumping contest for dogs, arts and crafts festivals, boat shows, and parades.

Autumn visitors find fewer crowds and the turquoise waters of the St. Lawrence River reflecting gorgeous fall foliage. There are harvest festivals, jazz on the water, and farmers markets. 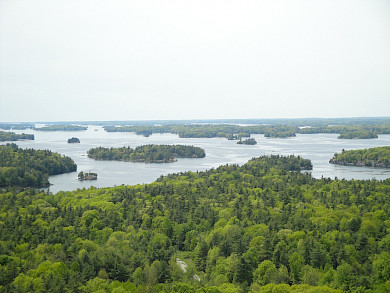 Although you can’t visit all the islands, many are open to the public and are home to parks, attractions, campgrounds, and cottage rentals. This constellation of islands straddles the border of the U.S. and Canada, but no island is split between the two countries, they are considered to be either in Canada or in the U.S.

A guided boat tour on the pristine waters of the St. Lawrence River is one of the most memorable and beloved activities that the area offers. Imagine seeing wildlife frolic along the riverbank while cruising past historic lighthouses, magnificent mansions on 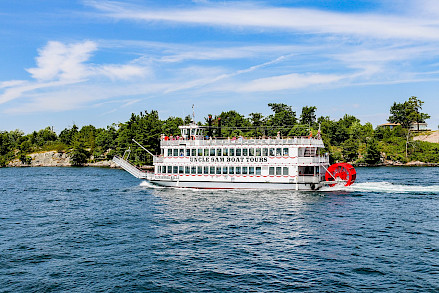 Millionaires Row, fairytale castles, and uninhabited islands. It is so entertaining to listen to
stories of this region’s fabled past while cruising. You will long remember the tales of pirate adventures, the escapades of bootleggers, and the grandeur of life of the rich and famous during the Gilded Age.

Singer Castle was built in 1905 on Dark Island by Frederick Bourne, a self made millionaire and the fifth President of the Singer Sewing Machine Company. This fanciful 28-room granite castle is complete with a clock tower, turrets, marble fireplaces, early 19th century plumbing and electric systems, secret passageways and dungeons. Designed to look like a British castle described in books by Walter Scott, this castle has many secret passageways and, most visitors can only speculate on their purpose. It is decorated as a hunting lodge with many fanciful details and furnishings that are original to the castle. Some folks say it is haunted. From the bedrooms in the house you can watch the American sunrise and the sunset in Canada.

George C. Boldt, a Prussian immigrant made his fortune in the hotel business. He ran the famed Waldorf Astoria in New York City during the Gilded Age and is credited with creating room service and the phrase, “the customer is always right.” Boldt and his wife 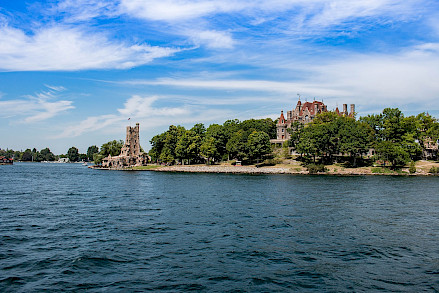 Louise fell in love with the 1000 Islands and often visited the region. Boldt decided to build a castle on Heart Island as a symbol of love for his wife Louise. In 1900 more than 300 workers were hired to build a 120-room castle. In 1904, tragedy struck and Louise died suddenly. Boldt telegrammed the workers and told them to stop work on the castle, which was almost finished. He never visited the island again.

The castle was abandoned for the next 73 years until 1977 when the Thousand Islands Bridge Authority took it over and began to restore it. Today the first two floors of the castle are furnished as the Boldts would have lived in it and the third floor has an interesting display on the history of the Gilded Age. Don’t miss the observation deck on the fifth floor or the ornate heart shaped gardens. The only way to Heart Island is by boat.

If you are a maritime and boating enthusiast don’t miss a visit to the Clayton Museum that is home to more than 300 well-preserved boats and thousands of recreational boating artifacts. Don’t miss the walking tour to La Duchesse, a 106-foot houseboat built in 1903 for George Boldt.

If you want a breathtaking view of the 1000 Islands head to the 1000 Islands Tower. There are three observation decks and an elevator that takes visitors to each one. The panoramic views are unforgettable.

There is a legend that as George Boldt cruised the 1000 Islands his ships steward didn’t have the ingredients on board that he normally used in salad dressing. Using local ingredients, the steward created a new dressing; Boldt loved it and named it after the region…1000 Islands and, put it on his menu at the Waldorf-Astoria. Another legend has a silent film star, May Irwin discovering the dressing from a local guide in Clayton, New York. It is said that she shared it with George Boldt.

The climate of the 1000 Islands is perfect for growing grapes and grains. Don’t miss out on trying a locally made wine or craft beer.

An engineering marvel opened in 1825, the Erie Canal is the first transportation system between the Atlantic Ocean via the Hudson River and the Great Lakes. This canal system transformed the history of New York and beyond. An Erie Canal cruise is like stepping back in time and experiencing a little bit of American history that is not well known.

It is so much fun to experience “locking through” as the vessel is raised and lowered so it is able to continue to ply its way along the canal. The cruise is slow and smooth, and the tree lined riverbank scenery and folklore is interesting. Today the Erie Canal, a National Historic Corridor is still a valued waterway, used for recreation.

Other Destinations We Travel In the United States

Plan your adventure to The 1000 Islands today!