The Newport Mansions and the Cliff Walk in Rhode Island are among the most popular attractions on the East Coast. Newport has earned the distinction of being named one of the oldest resort towns in America, and spending a little time in this gem of a city it is easy to see why. 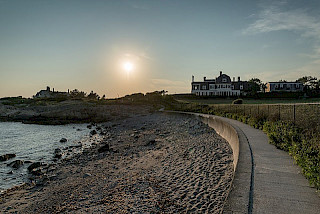 In the Gilded Age of the early 20th century, Newport became the playground for wealthy families with familiar names like Astor and Vanderbilt. These families and other blue-blooded luminaries and captains of industry built opulent summer cottages along the shoreline. Today, these meticulously preserved mansions are open for tours from top to bottom including behind the scenes tours of how the servants lived. Newport’s charms are not only in these decadent mansions and they’re beautifully landscaped grounds; they can also be found in a breathtaking Cliff Walk that is a must for visitors. Below find Tours of Distinction’s top Six Reasons why the Cliff Walk is a can’t miss thing to do!

A National Treasure – What makes the Cliff Walk unique is that it is the only National Recreation Trail out of 1300 designated trails that is also situated in a National Historic District.

A path along this section of coastline had been traversed for centuries by the Narragansett Native Americans and, then by early 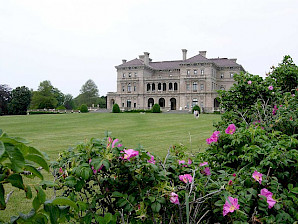 European settlers. It is thought that parts of the Cliff Walk as we now know it was first developed sometime in 1880. In the 1970s the Army Corps of Engineers improved the walkway making it safe for the public to use. Because of these improvements and the growing popularity of this path by the ocean, in 1975, the Cliff Walk was designated as New England’s first National Recreation Trail.

Superlative Walk by the Sea - There is nothing as refreshing as going on this 3.5-mile walk that runs along the Atlantic coast with the sun on your shoulders and the fresh sea breeze on your face. Most of the walk is flat and paved. It is relatively easy and depending on your pace should take two to three hours to traverse.

Incredible Views - The Cliff Walk hugs the coastline and has intoxicating views of the Atlantic Ocean that are blended with crashing waves, dramatic coastal cliffs, and lavish architecture. That is only half of the adventure as this walk takes you through tunnels, across bridges, downstairs, and past some of the prettiest ocean scenery in the East. 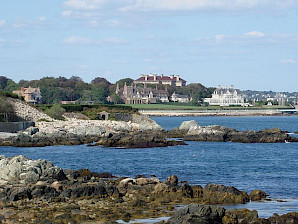 For the Birds - In addition to the dazzling architecture, the Cliff Walk is an excellent nature trail abundant with opportunities for bird-watching and for admiring fields of wildflowers. There are over 300 bird species in Newport and one of the best places to spot these fantastic feathered friends is on the Cliff Walk.

Forty Steps - Newport tradition holds that David Priestly Hall built the first Forty Steps in the 1830s so that his children could have access to a beach on his property at the base of the rocky shore. In 1840 Hall deeded public right of way to the steps to the City of Newport. Over the years, Forty Steps became a popular attraction. During the Gilded Age, the spot became a social gathering place for the hired help of the grand estates. Stories of 19th-century workers, many of them Irish, dancing jigs to accordion music are a part of Newport’s local history. Today taking the sharply descending stone stairway leads to a small promontory at the base of the steps where you can watch the waves crash against the rocks.

Spectacular Mansions - This walk is an ode to a by-gone era of opulence with one side of the walk lined with dozens of magnificent private homes and historic mansions and the other side the deep blue of Narragansett Bay. Starting from Bailey Beach here are some of the mansions you will see, each one has its own interesting history and beautifully landscaped gardens.

Chepstow - Newport architect George Mason built this Italianate style villa in 1860. In 1911 it was 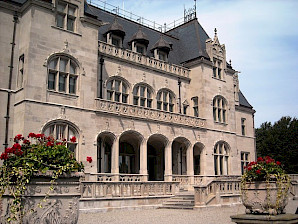 purchased by Emily Morris Gallatin and remained in the family until it was given to the Preservation Society in 1986. Beautiful views of the park-like landscape of this mansion can be seen from the Cliff Walk.

Ochre Court - A portion of this walk takes you past Salve Regina University. Ochre Court is the main administration building of the college. Designed in the Louise XIII style this mansion was commissioned by Ogden Goelet, a New York real estate mogul in 1892, and built at the cost of $4.5 million. It is the second-largest mansion in Newport after The Breakers. The architect, Richard Hunt designed Ochre Court after a chateau in the Loire Valley, France. High roofs, turrets, tall chimneys, and elaborate dormers characterize Ocher Court. It was given to the Sisters of Mercy in 1947.

The Breakers - Considered to be the grandest of all of Newport’s mansions, this 70 room Italian Renaissance-style palazzo structure was designed for Commodore Cornelius Vanderbilt by Richard Morris Hunt between the years of 1893 and 1895. This palazzo was inspired by the 16th-century palaces of Genoa and Turin and has a footprint of approximately one acre! The Cliff Walk affords magnificent views of the grounds of the Breakers from its broad ocean-facing terrace by a 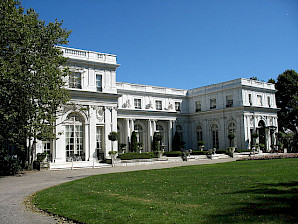 double loggia to intricate gardens composed of annuals in tapestry bedding, each half of which centers on a fountain. Yew, juniper, and beech trees punctuate a long, shaded ramble that weaves artfully through the grounds.

Rosecliff  - In 1899 architect Stanford White modeled Rosecliff after the Grand Trianon of Versailles for Theresa Fair Oelrichs, a silver heiress from Nevada. The house was completed in 1902 at the cost of $2.5 million. Rosecliff was the site of many whimsical soirees including a fairy tale dinner that included entertainment by Houdini. Look for the beautiful rose gardens as you stroll past the grounds of this estate. An early owner of this property, George Bancroft, and his gardener developed the American Beauty Rose. Several films have been shot here including the Great Gatsby, True Lies, Amistad, and 27 Dresses.

Beechwood - This Italianate style mansion was once the home of William Backhouse Astor and his wife, Caroline Webster Schermerhorn known as “the Mrs. Astor.” The house was a showplace for many of Mrs. Astor’s dinner parties.  In 2010 the property was sold for $10.5 million to Larry Ellison the co-founder and CEO of Oracle Corporation who completed renovations 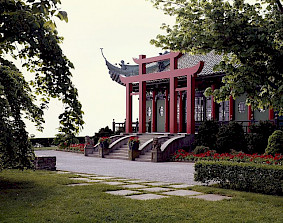 restoring the mansion to the way it looked when famed architect Richard Morris Hunt restored it in 1881. The parterre gardens accented with ornamental pergolas with limestone columns are complimented with symmetrical planting beds separated by paths.

Marble House and the Chinese Tea House - Built between 1888 and 1892 for Alva and William Vanderbilt by architect Richard Morris Hunt and inspired by Versailles Petit Trianon, this house set the pace for Newport’s transformation to an opulent resort of stone palaces. It is an early example of the Beaux-Arts style of architecture that at the time cost $11 million to construct. The Marble House was given to Alva as a gift from her husband on her 39th birthday! This estate’s park-like lawn is studded with specimen beech trees. A highlight here is the Chinese Tea House that was inspired by 12th century Sung dynasty temples. It appears today on the Cliff Walk as it did in 1909 when Alva brought her friends here to enjoy sea breezes and to hold rallies for women’s rights. 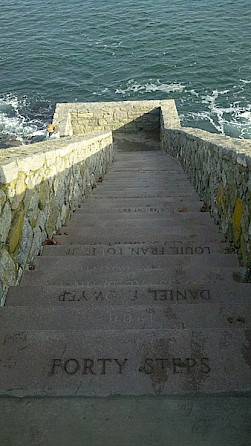 from red sandstone and granite making it very different from most Gilded Age mansions in Newport. Eventually, Rough Point became the home of Doris Duke who lived in the house until her death in 1993. The mansion opened for tours in 2000. Today’s guests explore this art-filled mansion and museum that reflect the way Doris Duke lived in it. The grounds were laid out by famous landscape architect Frederick Law Olmsted. A highlight of the Cliff Walk here is to walk across the stone arch bridge that evokes Olmsted’s original landscape design.

A trip to Rhode Island with Tours of Distinction is one of the best ways to experience the gilded age. Ideal to practice social distancing, the Cliff Walk is sure to transport you to those fabled days of old.