Discover our new healthy and safety protocols. Keeping you safe while traveling.

When I think of Canada I think of the great outdoors, snow-capped mountains, endless plains, vast expanses with endless natural beauty, whale and seal watching, artsy Montreal, Quebec’s European architecture, and, the Winter Carnival. One of the places on my bucket list is the opposite of what most of us think of when we think of Canada - I was determined to visit Prince Edward Island, or simply PEI, the smallest Canadian province. And, my guided tour to this pastoral island didn’t disappoint.

PEI was once part of Acadia, the colony of New France in North America that was eventually ceded to Britain under the Treaty of Paris of 1763. Today PEI is known as Birthplace of Canada” because the island hosted the first meeting towards the country’s 1867 Confederation, the first gathering of Canadian and Maritime statesmen to discuss the proposed Maritime Union. Amazingly it wasn’t until 1997 that PEI was connected to the mainland by the Confederation Bridge, before that the only way to get to the island was by plane or boat. This amazing engineering feat is known to locals as the “Fixed Link” and stretches an impressive 7.5 miles across the Northumberland Strait.  It is so long that it took about ten minutes to drive across! 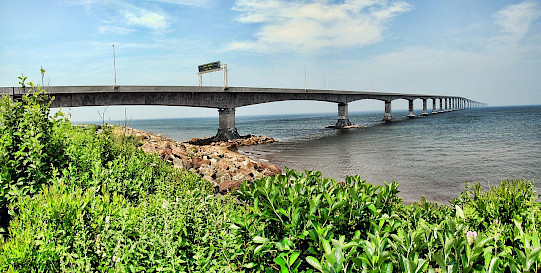 The capital city of PEI is Charlottetown that offers an ideal melange of warm hospitality, charming architecture, interesting shops with lots of handcrafted goodies, and restaurants serving up some of the best shellfish I have ever had…fresh off the boat from the cold, clean water of the North Atlantic. Best of all this picturesque seaside town is walkable with plenty of options for foodies, shoppers, historians, hipsters and lovers of great natural beauty.

Province House and Confederation Center of the Arts

The first attraction I wanted to see was the Province House National Historic Site and the Confederation Center of the Arts located next door. I was amazed at the exhibits here that feature an impressive replica of the Confederation Chamber. The Province House, a massive sandstone neo-classic building is over 170 years old and is currently under renovation. This edifice symbolizes the birth of the Canadian nation. For me, what I found most interesting was that Canada was not formed as a result of war, but as a result of discussion, cooperation, and agreement.

To learn more about the history of the Province House and the Charlottetown Conference, I watched Canada’s 20-minute award-winning film, A Building of Destiny.  Afterward, I headed to the second level for a virtual experience called “Imagine a Country.” I put on a headset that allowed me to “virtually” stroll the halls, and great chambers of Province House, I was amazed at how realistic this experience was, if you chose to do this, you will be too!

One of Charlottetown’s most historic landmarks, the Beaconsfield Historic House was built in 1877 for one of Prince Edward Island’s most successful shipbuilders, James Peake, and his wife, Edith in the Second Empire Italianate style.  At the time it was built it was the most modern residence in town boasting gas lighting, central heating, running water and a bathroom. The house has 25 rooms and eight fireplaces constructed from tile that was imported. During the years the Peake’s lived in the house there were many grand parties including a soiree held for Princess Louise, the daughter of Queen Victoria.

The final owner of the home, Henry Cundall, a philanthropist willed the home as a residence for young women that came to Charlottesville to study. Over the years the house was used as a YMCA and also as a residence for nurses. In 1973, Beaconsfield was restored and officially opened by the Queen as the headquarters of the Prince Edward Island Museum and Heritage Foundation. Today, the house retains many of its original features and is decorated in period Victorian furniture. The gift shop offers an interesting selection of books on Prince Edward Island, prints, and pottery.

In addition to strolling along the boardwalk and enjoying the serenity of PEI’s unspoiled coastline, a highlight of my trip was a visit to the  Campbell home that inspired L.M. Montgomery to write Anne of Green Gables.  Since the debut of the series in 1908, this classic has become a worldwide favorite. Pulling up to the Campbell House that Montgomery once called her “wonder castle” it is easy to see why this unspoiled farmland inspired Anne’s Lake of Shining Waters. 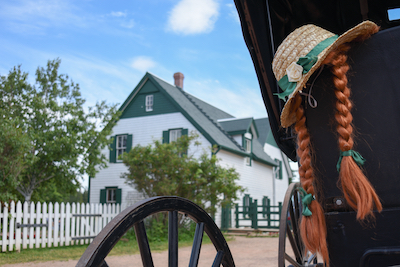 A tour of the house is like stepping into Anne’s  shoes -literally! Special highlights include the author’s whimsical patchwork quilt and delicate needlework.  The enchanted bookcases that were often referred to in her books are scattered throughout the cottage making me feel like I was a character in one of her books. On a personal level, the house also has a beautiful collection of photographs hand-colored by the author as well as furnishings that she used.

For me, the most memorable experience was a carriage ride through the verdant gently rolling farmland that surrounds the cottage to the Lake of Shining Waters. This ride has some of the most idyllic scenery that you will ever see.

One of the most unexpected things about Prince Edward Island is the distinctively red shoreline that gets its color from an abundance of iron in the sand. I decided to head out to PEI National State Park for a stroll on the boardwalk to spot some of the areas 300 plus species of birds. I saw great blue herons, ospreys, and plovers walking on the edge of the shoreline, it was just beautiful. Afterward, I explored 20 multi-media exhibits that detailed how this exquisite coastal seascape was sculpted. 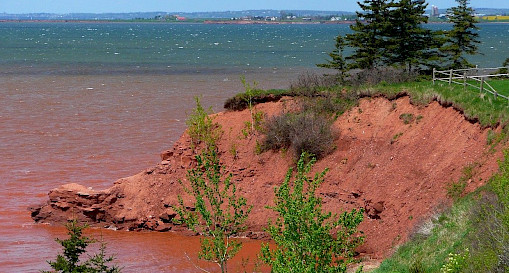 Having worked up a thirst walking on the sandy beach looking at the stunning red cliffs, I decided to pop into the historic house, Dalvey by the Sea that was once summer home and is now a hotel and restaurant. As an avid tea drinker, I was delighted to partake in their High Tea that is served from 12 noon to 4 p.m. The outlay of scones, clotted cream, season jams made right on the island, homemade sweets, and sandwiches hit the spot.

If retail relaxation is more your speed, head to Victoria Row located just south of the Confederation Center for the Arts in downtown Charlottetown. This is a traffic-free street chock full of beautiful Victorian houses that are now shops. It is a double treat to go shopping in this authentic Victorian environment. I spent hours exploring the cobblestone streets that are lined with a multitude of shops that have an interesting array of unique handcrafted items that make perfect souvenirs. 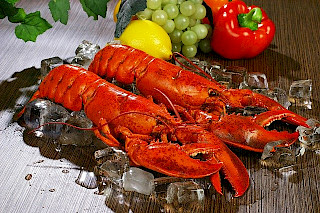 Belvedere Street. What a feast for the eyes…and, stomach too. The wide variety of food vendors made this experience a total food fest for a foodie like me! In addition to the fruits, vegetables and fresh seafood, rural bakeries offer freshly baked bread, jams, and other specialty food products, and artisans offer a wide variety of one-of-a-kind handmade works of art. The Farmers Market also takes place on Wednesday mornings.

I couldn’t help but notice the profusion of lighthouses on this beautiful North Atlantic Island. Each lighthouse has a story to tell and most are open to visitors. The Woods Islands Lighthouse located near the ferry terminal has exhibits about the areas seafaring history. The oldest lighthouse is Point Prim and, Panmure is the oldest wooden lighthouse on PEI. For buffs of the epic sinking of the Titanic, it is said that Cape Bear Lighthouse was the first Canadian land station to hear the distress calls. The Souris Lighthouse has an interpretative center and the East Point Lighthouse has stunning ocean views. 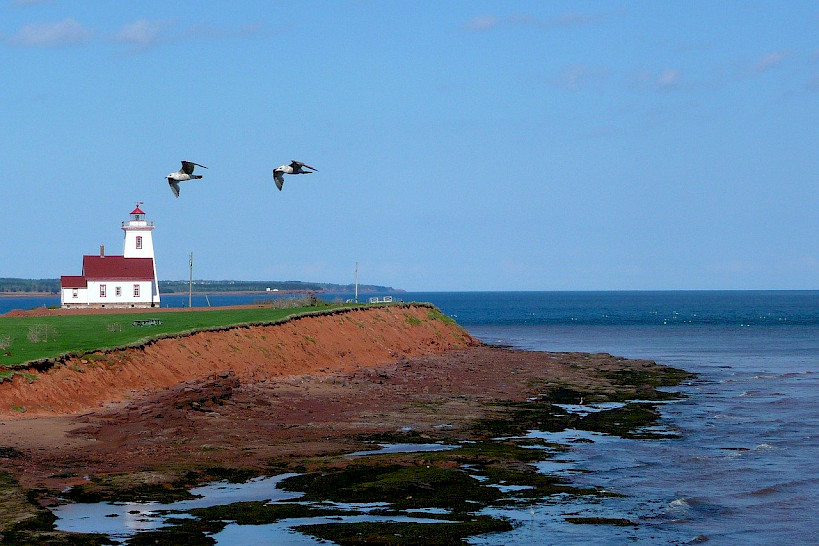