“He is unfortunately so beautiful and wise, soulful and lordly, that I fear life must fade away like a divine dream in this base world.”  Richard Wagner on Ludwig II, 1864.

Set high above the sparkling green-blue waters of the Forggensee, on Jugend Mountain, Neuschwanstein Castle perches like a fairytale castle come to life. This white confection rises like a gleaming jewel from the shadows of the mountain, bristling with gables and balconies, arches, and crenelated towers that pierce the sky.

Just looking at its limestone facade and deep blue turrets most people think of Sleeping Beauty’s castle in Disneyland. After all, Walt Disney and his wife visited Europe and stopped at Neuschwanstein Castle, so perhaps, the striking similarities between the two castles aren’t that much of a surprise.

The story of the builder of Neuschwanstein, “Mad King” Ludwig II of Bavaria is not as idyllic as the setting of this castle and entails elements of mystery, murder, suicide, political intrigue, romance and, perhaps, insanity.

Ludwig II was born in 1845 into the Bavarian ruling family, the House of Wittelsbach, well known for its’ eccentric family members. At the time of Ludwig II birth, Bavaria, one of thirty-nine independent states that formed Germany was ruled by his grandfather, King Ludwig I. Some four and a half million people lived in Bavaria which was the largest of the German states. King Ludwig, I like his grandson, Ludwig II were both patrons of the great artists and architects of their day, and both, in their own ways, came to an untimely end. Ludwig I was forced to abdicate his throne due to political turmoil surrounding his mistress, Loa Montez, and Ludwig II’s death was controversial with some believing it was suicide and others believing it was murder.

Ludwig I was succeeded on the throne by his son and Ludwig II’s father, Maximillian who was an intellectual conservative with very traditional views. Ludwig II’s parents didn’t really like each other and cared little for their children. King Maximillian and his wife, Princess Marie of Prussia, set unreasonably high expectations on young Ludwig II which inevitably lead to dashed hopes. Ludwig II’s failures were met with beatings and harsh verbal reprimands from his father leaving his relationship with both parents strained and devoid of any natural affection.

An imaginative and shy child growing up alone in the magnificent Hohenschwangau Castle (that roughly translates as “high country of the swan”) and surrounded by alpine beauty, it is easy to see how Ludwig II became immersed in his own world of dreams. This castle is decorated in the gothic style with countless frescoes of heroic German sagas connecting it to the Teutonic legend of the Swan Knight. These sagas of the long forgotten days of knighthood and chivalry coupled with Ludwig II’s love of the splendors of Versaille became an obsession that was to last throughout his life.

Ludwig II inherited the troubled throne of Bavaria at 18 when his father, King Maximillion died suddenly. Ludwig II had no political training from his father and when he took the oath of allegiance to the constitution, he was a complete enigma to his court. Never interested in politics, Ludwig II all but abandoned his kingly duties in pursuit of his romantic ideals. Like his grandfather, Ludwig I, he became a passionate supporter of the arts. Ludwig II, however, took his passion to a whole different level by insisting on building castles and participating in every aspect of the process. 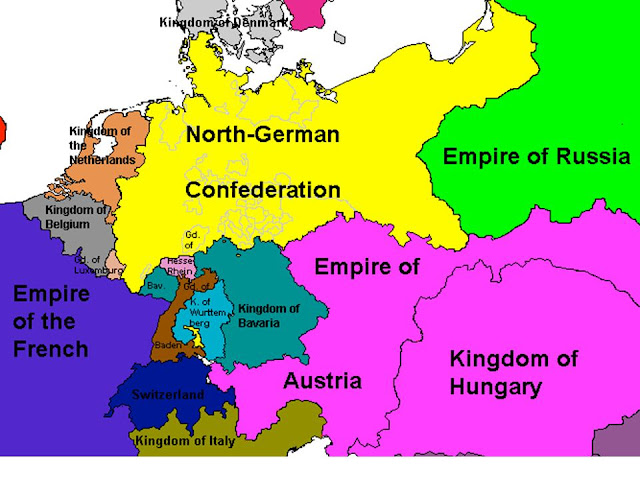 At the age of 20, Ludwig II suffered a major political defeat in Bavaria’s participation in the Seven Weeks War. The result was a peace treaty that created a new German State. In return for financial concessions, Ludwig II was forced to sign a letter declaring that Bavaria was no longer an independent state, but part of the German empire. Ludwig II’s uncle, Wilhelm I was declared the German Emporer. The failure of losing Bavaria to Prussia caused Ludwig II to fully retreat into a world of dreams; and from this period on Ludwig turned his attention away from politics and increasingly toward construction, the arts, and the theatre.

A noted recluse, Ludwig II had few friends. In his youth, his best friend was Prince Paul Maximillian Lamoral of the Thurn and Taxis family. They would read poetry and stage scenes from Wagner’s operas. A life long friendship also developed in his early years with his older cousin Elizabeth, Dutchess of Bavaria, who married Emperor Franz Joseph of Austria becoming the Empress of Austria. This friendship lasted for his entire life. The Empress and the King loved to write and dream together and even developed nicknames for each other, Ludwig was “the eagle” and Elizabeth was “the dove.” Both were brooding and reclusive, they disliked the duties of court life and were unhappy with their lives. Ludwig II and Empress Elizabeth shared a mutual longing for beauty and dwelt in a world of dreams, each giving access to the other but denying the rest of the world. Although they were never lovers, they were soulmates.

Ludwig II became engaged to Dutchess Sophie of Bavaria, the younger sister of Empress Elizabeth of Austria in January of 1867. The wedding was planned for Ludwig’s 22nd birthday on August 25, 1867. Ludwig’s anxieties over the public festivities that would accompany the wedding and the simple fact that Duchess Sophie was not a replacement for Empress Elizabeth pushed him to postpone the wedding to October 12 and, once again, to November 28. When Sophie’s father heard of this postponement he wrote to King Ludwig II demanding that he set a firm wedding date or call the engagement off, and, callously, Ludwig II called the wedding off blaming it on Sophie’s parents.

Ludwig II and the Arts

In addition to his support of Wagner, Ludwig II was instrumental in bringing the works of Shakespeare, Ibsen, and Mozart to Munich for the first time. One of Ludwig II first acts as King was to establish a new Court Theater, the Staatstheatre am Gartnerplatz, still one of the most active theaters in Germany. 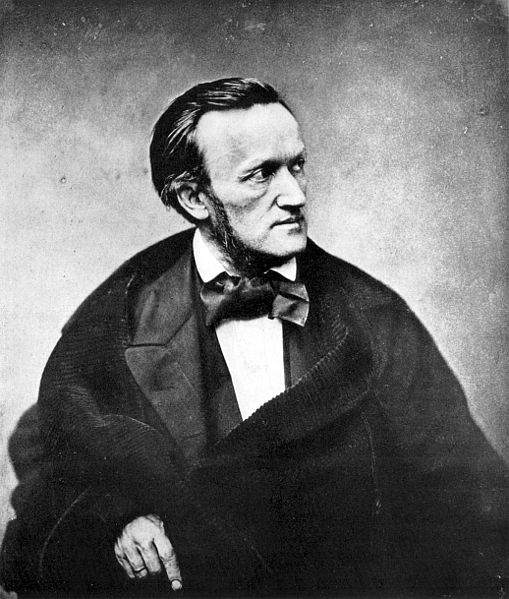 Within a month of ascending the throne of Bavaria Ludwig II sent his private secretary in search of composer Richard Wagner.  Wagner came to the capitol with enormous debts which Ludwig settled on his behalf. Wagner was put on the official court payroll and housed in Castle Berg where Ludwig II could visit him every day. They spent hours discussing the composers latest ideas and plans for the future. Ludwig II wrote rapturous declarations of his undying love, support, and admiration for Wagner. For Ludwig’s 19th birthday in 1864, Wagner composed the March of Homage much to the delight of the king.

Without the king’s support, it is unlikely that Wagner would have ever completed his great Ring Cycle, Parsifal, or lived to see the staging of Tristan und Isolde. Over the course of their friendship, and much to the anger of court officials, Ludwig II lavished 985,099 guldens on Wagner which is equivalent to $50,870,613 dollars today. Eventually, Wagner left Munich and settled in Switzerland in a house financed by Ludwig II and there, he turned to someone else for comfort.

The failure of his marriage to Dutchess Sophie, the loss of Bavarian independence, and the fact that Wagner turned to someone else for comfort had a major effect on Ludwig II. Disillusioned in life, from 1867 onward, Ludgwig spent more and more time in the Bavarian Alps where he retreated into his own fantasies and began to build. Ludwig II built three lavish castles to realize his dreams in brick and stone. He wanted to create palaces that captured the romance of Teutonic Sagas and the splendor of Versailles. Wagner’s operas allowed Ludwig II to enter into the romantic world of Medieval heroes but this experience was limited to the stage. In the castle’s Ludwig built, Linderhof, Herrenchiemsee, and Neuschwanstein he could actively enter the golden splendor and romantic tales of times gone by leaving reality far behind.

Ludwig’s passion for building left him deeply in debt, and by the end of 1885, he owed more than 14 million marks to creditors.  When Ludwig’s ministers found out about the staggering funds owed to creditors, who could sue the king in open court, they refused to fund any more building projects. A furious Ludwig II threatened to sack his entire cabinet. The response of Ludwig II’s ministers upon hearing this threat was to remove the king from power on June 10, 1886, declare him insane, and appoint his uncle as Prince Regent. Ludwig II called for his restoration and armed resistance. Before Ludwig II could rally support, on June 12,1886, Ludwig II was seized by the Bavarian government and was taken to Castle Berg as a prisoner. Here he was put under the care of  Von Gudden, a psychiatrist, who declared him insane.

There is no part of Ludwig II’s life as mysterious and clouded in legend as that of his death. On June 13, 1886, Ludwig II asked Von Gudden to join him for a stroll around Lake Starnberg. Ludwig II set off for a walk with the doctor around 6 p.m. and neither man was seen alive again. Their bodies were retrieved from the shallows of the lake a few hours later, with Von Gudden’s showing that he had been badly beaten. Ludwig’s death was attributed to drowning, although no water was found in his lungs and he was a strong swimmer. The space for describing the cause of death for Ludwig II was left blank on his autopsy report.

There is speculation that Ludwig was murdered by his enemies in the government. Another theory claims Ludwig II was shot although no bullet wounds were recorded in his autopsy. It was also claimed that Von Gudden brought a bottle of chloroform with him on the walk and this caused Ludwig’s death by drowning. It is then supposed that Von Gudden died of a heart attack from the shock of Ludwig’s death. In 1933, Ludwig II’s personal fisherman claimed that he was hiding in the bushes with his boat to help Ludwig II escape. The fisherman claimed that as Ludwig boarded the boat he was shot. Another story has it that Ludwig II murdered Von Gudden in an attempt to escape and died of natural causes; perhaps a stroke or a heart attack brought on by the cold water of the lake.

The suicide theory also made the rounds and was popular. People close to Ludwig II claimed he threatened suicide in the weeks leading to his death. Had Ludwig really meant to take his life he had plenty of opportunities while he was free at Neuschwanstein Castle before he was taken prisoner at Castle Berg.

There is also evidence that Ludwig II’s cousin, Empress Elizabeth, of Austria, Ludwig II’s “soulmate” spent the afternoon wandering along the shore of Lake Starnberg at her childhood home that was across from Castle Berg. It is said that she had a carriage waiting by the shoreline ready to take Ludwig II to Munich or Austria. Boats were organized to pick Ludwig up and bring him safely to the waiting carriage. It is known that in the afternoon Ludwig II sent a note to his cousin, Empress Elizabeth, perhaps it was to alert her to the time of his walk around the lake. What exactly happened that dark and rainy night will never really be known.

Tours of Distinction - Bavaria and Austria 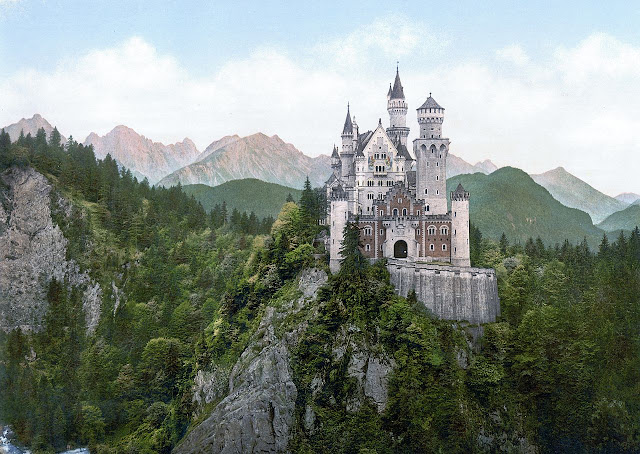 On our tour Sounds of Bavaria & Austria featuring Oberammergau, you will visit the romantic castle of Neuschwanstein built by Ludwig II as well as the home he grew up in, Castle Hohenschwangau. Other highlights include Munich, a journey to Oberammergau, Salzburg and Vienna. For tour details click here.