Oak Alley - the Grand Dame of the Lower Mississippi River

Oak Alley is often called the Grande Dame of Louisiana’s magnificent sugarcane plantations and should not be missed. A day exploring Oak Alley Plantation is truly like stepping back into a storied past. There is an old southern charm ambiance about this mansion that is undeniable, one that brings you back to the genteel French colonial days of Louisiana’s history.  This white-columned house with airy porches framed by a Live Oak canopy path brings to mind the most familiar and evocative images of what life must have been like in the deep south in the 1800s. Sugarcane shaped the history of the Mississippi River in this area and Oak Alley tells a multifaceted story of slavery, white gold, resilience, love, tragedy, and wealth.

Located in Vacherie, Louisiana, close to the banks of the Mississippi River, Oak Alley is named for its’ distinguishing 800-foot alley or canopied path that forms a magnificent gateway to the Mississippi River.  This path is composed of a double row of 28 Live Oak trees with 14 on each side. One of the first things visitors notice about these trees is their size, they are the largest trees in the U.S. in terms of wood volume, and the biggest tree species east of the Rocky Mountains.

Protected by Louisiana law, the branches of some of these trees actually touch the ground indicating that they are the oldest. Because of their age, these branches are not trimmed. A few of the largest trees in the alley have a girth of 31’ feet, a height of 71’ feet, and a crown spread of 150’ feet. For years it was thought that the oldest Live Oak trees were planted by a French settler around 1710 and predate the building of the house by many years. After much historical research, in 2017, it was determined that 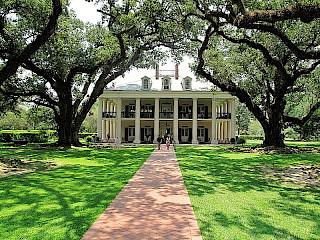 the trees are between 225 and 250 years old and were transplanted here using slave labor. The Josephine Oak is the largest Live Oak tree and was name after the last owner of the house as a thank you to her for the creation of the Foundation, which has the mission of preservation, education, and research.

The builder of the house, Jacques Roman was a successful businessman from New Orleans that wanted to expand his business interests into sugar production. Roman bought the land in 1830 and established a sugar plantation.  In time, Roman was named “the king of sugar” and was one of the wealthiest men in the South. In 1836, he decided to build a magnificent house on the plantation in order to lure his wife, Celina away from New Orleans. The house was financed by credit accrued from the plantation’s production of sugar. At the time, credit was issued before the sugar crop was harvested. After the crop was sold, planters would pay off the debt for the year, thereby increasing their line of credit for the following year. This credit scheme was in place until the end of the Civil War.

The house was built in the classic Greek Revival Antebellum style from the plans drawn by Celina’s father.  It is constructed of 16-inch brick walls that are stuccoed to keep the hot air out and cool air in. There are 28 Doric columns that support porches on the first and second floors. The porches help protect the interior from the heat and sunlight. Inside the house, high ceilings and long windows help to circulate the air. The house was completed by slaves in 1839. 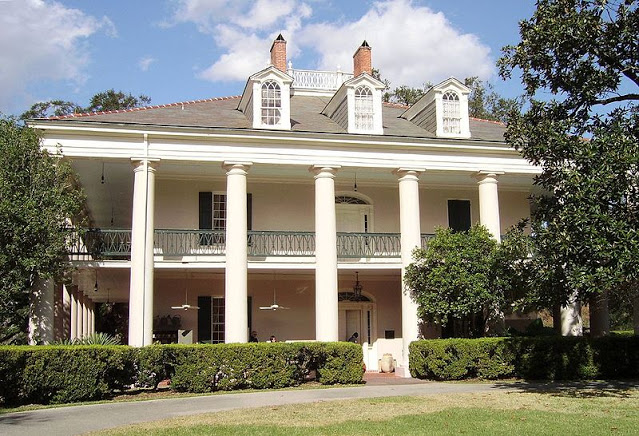 During the time that Roman and his wife Celine lived here, there were barns, a sugar mill, and 1200 acres of land. Over 800 acres were cultivated and more than 100 field slaves were tasked to plant, tend, and harvest the crop. More than 200 men, women, and children lived enslaved on this plantation. 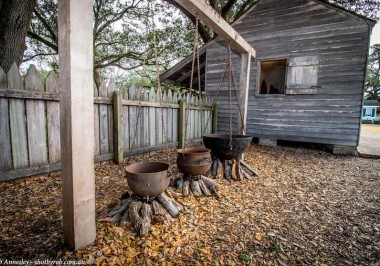 Slave life at Oak Alley was difficult. Slaves spent hours and days before harvest weeding and irrigating thousands of sugarcane stalks. Harvest time was particularly strenuous because the sugarcane stalks had to be cut by hand with machetes. The cane was then brought to the sugar house where machinery would be used to create cane sugar juice that would later be turned into sugar or molasses. In general, male slaves were used in the sugar fields and women were tasked with repairing roads and levees. After the Civil War and emancipation, some slaves changed their

names and ran away while others were conscripted by the Union Army.

Stewardship and the Stewarts

There have been several owners since the time of the Romans. The last owners, Andrew and Josephine Stewart were the most significant because they gave today’s visitors the chance to experience plantation life in the deep south.  The Stewarts first saw the picturesque Live Oak alley and declining antebellum mansion from a cruise on the Mississippi.  They decided to purchase the home in 1925 for $50,000.  The Stewarts were from Texas and bought Oak Alley to use as a cattle ranch.

Even though it was run as a cattle ranch, Josephine decided she wanted to revive the history and former beauty of the mansion. The Stewart’s invested $60,000 in the renovation process that took years. In the 1960s sugar cane was reintroduced to Oak Alley. Another project Josephine took on was the construction of the slave quarters that were once located behind the house. The present replicated slave quarters tell the untold stories of the slaves that toiled and lived here. 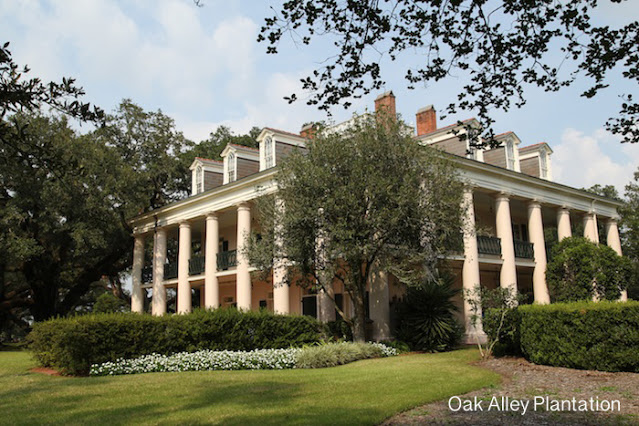 The work that the Stewarts did on the house is considered by many to be one of the best examples of adaptive restoration in the entire Mississippi Region. The Stewarts had no children. After Andrew’s death in 1946, Josephine became concerned about the future of the property. In 1972, she created the Oak Alley Foundation to oversee the house and the property.  Josephine’s’ plans were a great success. Three generations of the Mayhew family, direct descendants of Josephine, are currently involved in Oak Alley.

Today,  surrounded by working sugar cane fields, visitors can tour the house, visit the slave cabins, stroll the 1920’s formal garden and 1830’s kitchen garden, tour a working blacksmith shop, learn about sugarcane at the sugarcane exhibit and theatre, and pay their respects at the Stewart graveyard. It is best to start your tour at the Sugar cane exhibit and theater to learn how the plantation functioned before setting out to explore the “big house” and slave cabins.

The tour of the plantation house is amazing. The living room, dining room, kitchen area, parlor, and sitting rooms are eloquently appointed with antiques. Beautifully appointed bedrooms on the second-floor display life in the 1880s. The bedroom suite painted lavender was the room where Josephine Stewart spent her final years, she passed away in 1972. When you are inside the 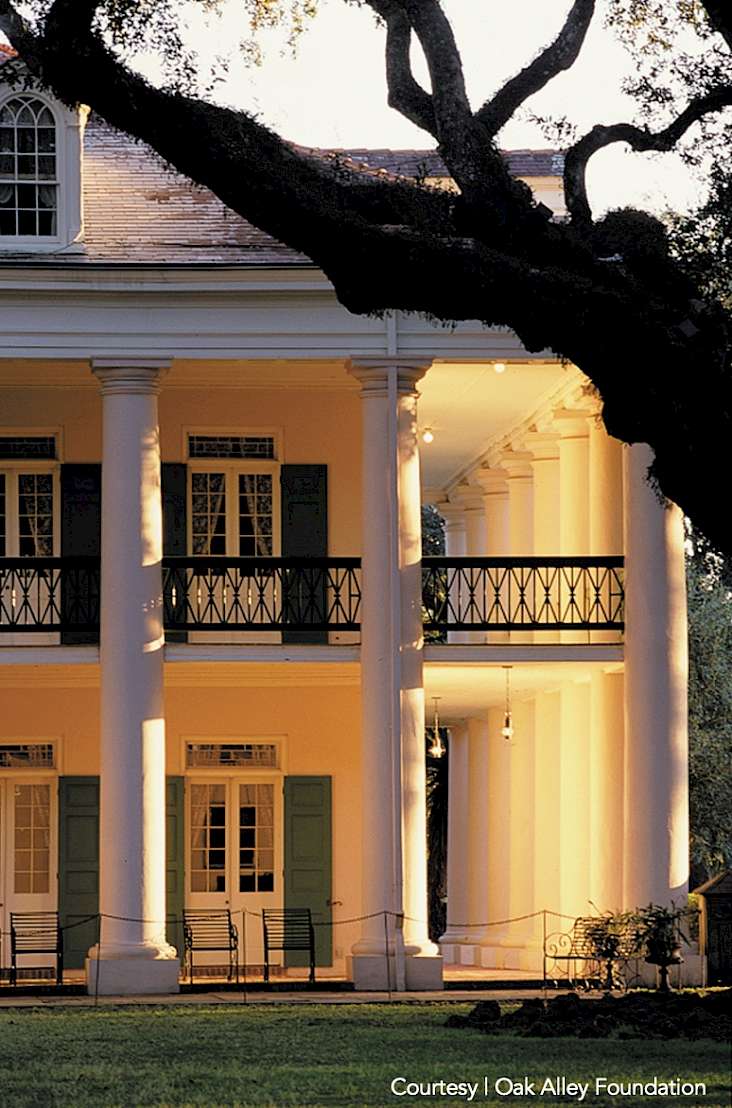 plantation mansion, don’t miss the view from the front balcony that offers the best view of the Live Oaks of Oak Alley set against the background of the levees of the Mississippi. The new artifact room exhibits items that belonged to the Roman family. The primary sourced slave database allows visitors to research genealogy.

The self-guided walking tour of the authentically replicated slave cabins tells the stories of some of the slaves that once lived and worked here. Inside each cabin, there is a great deal of information that shows the daily lives of slaves and exhibitions that cover health care, punishment, and life after emancipation.

Visiting Oak Alley allows people to explore all of the exhibits at their own pace making this an extraordinarily rich experience. A visit to Oak Alley is not just a reminder of Louisiana history or the history of plantation life in the 1800s, it is also a look at human history, good and bad, because of the riveting displays and constructed environment that has been lovingly preserved here.

The Lower Mississippi River Cruise offered by Tours of Distinction from May 21 - May 29, 2021 features seven nights on the luxurious paddlewheel boat ‘Queen of the Mississippi’.