Travel in the footsteps of the Vikings in Newfoundland.

The Viking Trail, also known as Highway 430, runs along the western coast of the island, with the Strait of Belle Isle on one side and the Long Range Mountains on the other, from Deer Lake in the south to L’Anse aux Meadows on the extreme northern tip.  Many visitors cover this 460 km long route in one or two days, and thereby miss some of the most beautiful places on the ‘rock’. We have explored this region on two occasions, each time for about 12 days, in 2003 and 2007. On the second trip we visited many places again and took the time to see those we had missed the first time. Our base was the Ocean View Hotel in the little town of Rocky Harbour, right in Gros Morne National Park, from where we made day trips and longer journeys. Ardent hikers start from here to reach and climb Gros Morne Mountain, an 800 metre high, bare limestone block. The steep, rough trail leads to the level top and then to several view points on the far side of the mountain, from where the long and difficult trail winds downward again. 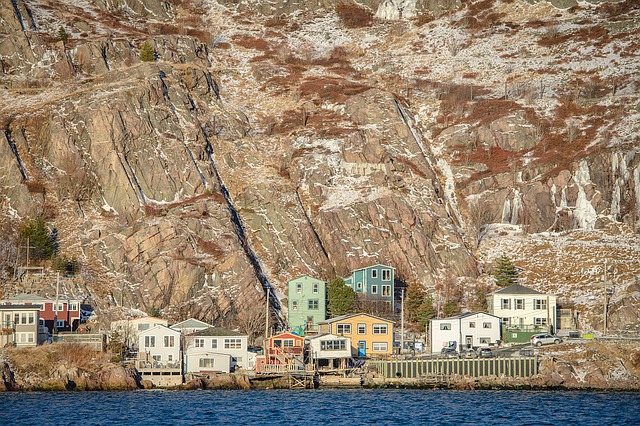 Just south of the town is beautiful Bonne Bay, where two villages, connected by a small ferry, are well worth visiting. From Norris Point on the north shore we took a two-hour discovery boat tour, where a marine biologist explained the complex nature of the bay and demonstrated how the health of the water is constantly monitored. The tour includes a visit to the Marine Discovery Centre and Laboratory, where many sea creatures are in open tanks and can be touched and handled by the visitors.

On the south shore is Woody Point, the gateway to other fabulous hiking trails on and near the famous Table Lands. These are a very old rock formation that was thrust up several kilometres from deep within the earth’s mantle at the time the North American continent separated from Africa and Europe about 250 million years ago. The rock is acidic and rich in several minerals. In spite of the long time since the rock’s contact with the atmosphere and water, practically no topsoil has formed and only very few plants can grow here, among them the Pitcher Plant, which obtains its nutrients from the insects it catches in its liquid-filled leaves. At the nearby Discovery Centre geologists will explain this unique region.

On a calm day we took the opportunity to kayak on the bay to explore some of its coves and beaches from the water. About 3 km north of Rocky Harbor is the lighthouse of Lobster Cove, and nearby at Broom Point a Parks Canada ranger demonstrated how the local cod fishermen used to live, and how they caught, salted and dried the fish.

The now-restricted cod fishery is an old and strong tradition in Newfoundland. The people in most of the small settlements all around the island and along the shore of Labrador used to live exclusively from fishing and until recently their communities were accessible only by boat. The well-intentioned but misguided resettlement of the people into fewer but larger centres by the Provincial Government in the 1960’s was vehemently resisted and eventually had to be abandoned. Many local legends and songs tell of the hardship experienced by the simple fishermen and their families, described most typically by Gary O’Driscoll’s song with its refrain:

“And it’s out of St Leonard’s, and out of Toslow
They steamed ‘cross the bay with their houses in tow
With their beds in the bow, their stoves in the stern
Bound away with their sons and their daughters.”

A little further north along the trail, right on the edge of the water, is a unique rock formation called ‘The Arches’, which were formed by the wave action on the rock.

The relatively narrow strip of land between the highway and the mountain range is covered with ‘Tuckamore’, a dense cover of spruce and pine and fir, their growth stunted to about 4 feet by the constant wind, salty spray and the long, cold winters. Even moose and caribou have trouble walking through this thick tangle and one can occasionally see the trails they have trampled down.

Cow Head is a small village where, during the summer, the Gros Morne Theatre Festival is staged, consisting of a lively mix of dinner theatre showcasing Newfoundland themes. The long, sandy beach at nearby Shallow Bay is a favourite destination during hot summer days. Further along the trail, one reaches Port au Choix, a National Historic Site. Here archaeologists have found remains of the Maritime Archaic Indians, direct descendants of the first people to live on the North American continent who had migrated from Siberia some 12,000 years ago and finally reached the island of Newfoundland 6,500 years later, becoming the province’s first inhabitants. The Discovery Centre displays many artifacts found in this area, and a botanist showed us the fascinating adaptation of common plants to the sparse soil and rough climatic conditions, where a 10-year old willow tree stood less than a foot high, and 50-year old juniper had grown only three inches tall. 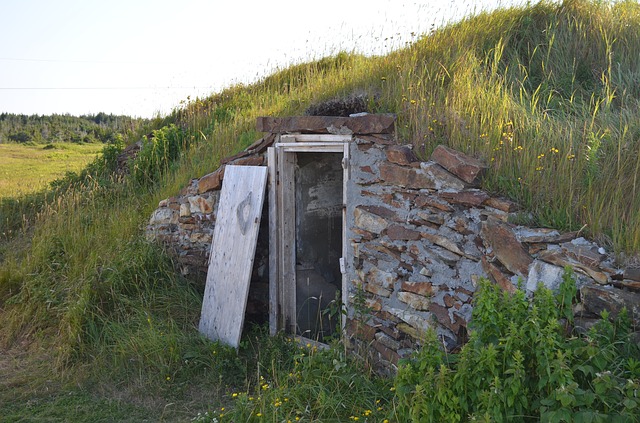 From St. Barbe the ferry took us on a side trip to Labrador. Here we saw a beautiful example of political correctness over-riding all common sense. The landing site of the ferry at Blanc-Sablon is about 1 km inside the province of Québec, resulting in a 1½ hour time difference between the few residents of the three tiny villages on the Québec shore and the nearby villages on the other side of the border in Labrador. The ferry operates on Newfoundland time so the Québec residents must add 1½ hours to their local time to determine when the ferry leaves.

We travelled from Blanc-Sablon northwestward across the Labrador border on a section of the spectacular Trans-Labrador Highway towards Red Bay. On one side of the road are deep forests, interrupted by beautiful waterfalls, and on the other side icebergs majestically drifted by on the deep blue water.

Stopping at Point Amour we climbed the 122 steps of the highest lighthouse on the Canadian Atlantic coast, built in 1855. It is 38 meters tall and during the summer season still guides ships on their way from Britain to the St. Lawrence through the narrow section of the Straights of Belle Isle, a route some 200 miles shorter than the one around the south coast of Newfoundland. The first light source was an oil lamp with a number of wicks and a rotating reflector, which could be seen from over 100 miles away.  The lamp consumed about 200 gallons of whale or seal oil per year. An electric light enclosed by a large fresnel lens replaced the oil lamp at the turn of the century.

The small town of Red Bay, another National Historic Site, has a protected harbor that was used in the 16th and 17th centuries as a summer base by whalers from the Basque region of Southern France and northern Spain. The local museum has many artifacts from this time period on display, including the remnants of a Chalupa, the open vessel used to hunt and harpoon the whales. 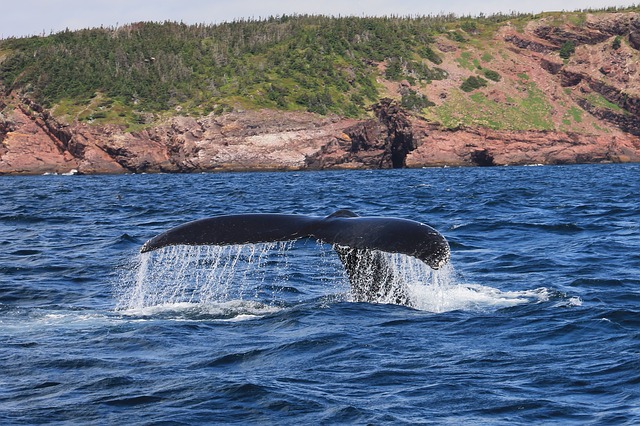 Later on, passing through the town of St. Anthony, we stopped to see the house and the museum dedicated to Sir Wilfred Thomason Grenfell, a British physician who came to Newfoundland in 1892 to provide medical services to the native people and the offshore fishermen. He was very successful in raising money worldwide to build nursing stations, schools and hospitals and greatly improved lives. He also was an outdoor enthusiast; his adventure on a drifting ice flow has become famous.Some years ago a stranded polar bear became a nuisance in the town; it was captured and released some distance away, but when it came back it had to be killed. It is now displayed in the town hall.

Finally, we reached the northern tip of the island and the National Historic Site of L’Anse aux Meadows. Here a Norwegian couple, historian Dr. Helge Ingstad and his archaeologist wife Anne, found evidence of occupation by the Vikings about a thousand years ago. The Norse Sagas of Erik the Red and his son Leif Eriksson had guided the Ingstads in their search. Twelve years of excavations and research confirmed that this site had indeed been a Viking settlement, although it was probably a way station rather than a permanent village. A number of the original sod houses have been reconstructed, and Parks Canada rangers conduct guided tours and explain the features of this settlement. Another worthwhile stop along the Viking Trail is the Western Brook Pond, where a 3 km boardwalk leads to the dock from where regular boat tours provide glimpses of the fascinating rock formations. From here, hardy hikers can take several days on an unmarked wilderness trail to reach Gros Morne Mountain. 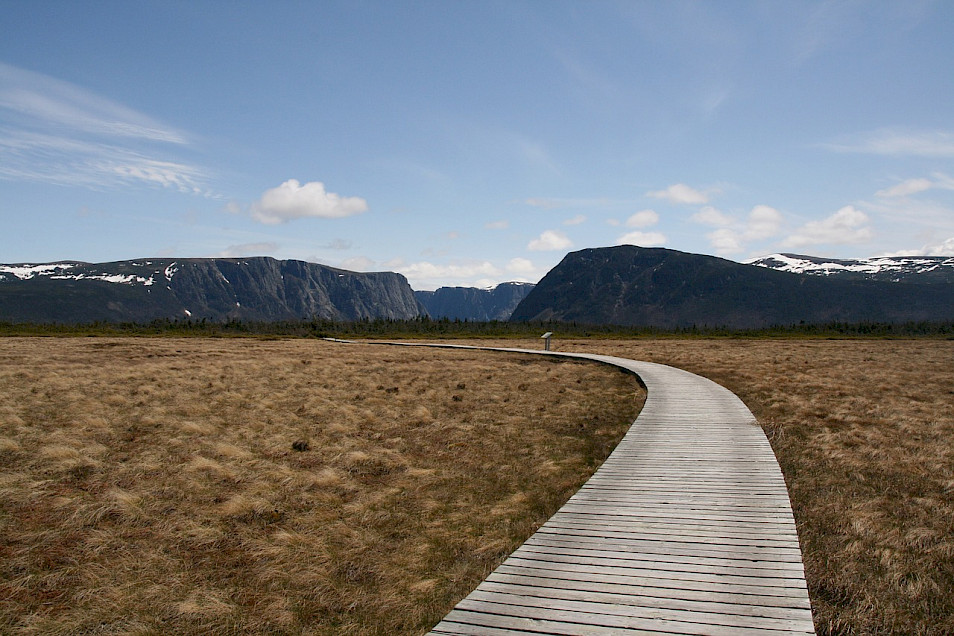 Any traveller to this fascinating island should follow the example of the local folks: “Take it easy, don’t rush, the world is not running away!”

The Newfoundland In-Depth small group guided tour offered by Tours of Distinction features six nights in Newfoundland with most meals, all sightseeing and airfare.