Hawaiian Cruise Ports of Call - the Big Island and Kauai

When you look at some of those picture perfect postcard images of the South Seas the beautiful islands of Hawaii often come to mind. Think white sand beaches that overlook azure blue lagoons, bright pinks, yellows and oranges of hibiscus flowers and emerald green peaks that touch the horizon. The Hawaiian cruise with Tours of Distinction goes well beyond these idyllic Paul Gauguin images when the next port of call is the Big Island of Hawaii and the final Port of Call is Kauai.

Read our Cruise Blogs on the Maui and Oahu portions of this cruise! 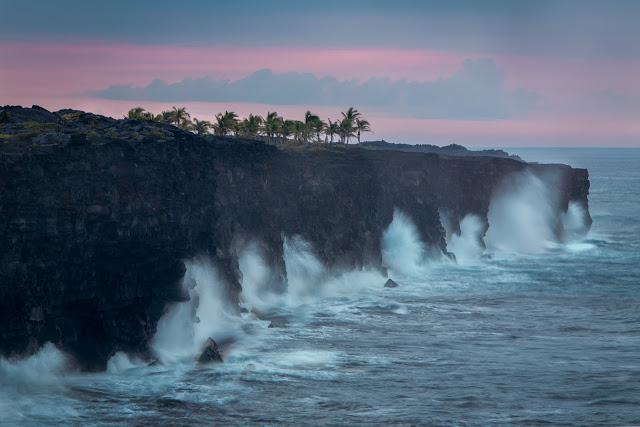 The Big Island or Island of Hawai’i is the largest and youngest of all the Hawaiian Islands and it is still growing! Since the ongoing eruption of the Kilauea volcano, more than 600 acres have been added to the island. One of the most fascinating aspects of this island is that it has eight of the thirteen different climate zones in the world and these ecosystems range from tropical forests to snowy alpine deserts!

Your first stop on The Big Island is Hilo located on the west coast of the island. The highlight of the day is the drive past acres and acres of macadamia nut tree orchards en route to the Hershey-owned Mauna Loa Macadamia Nut Visitor Center. The factory tour here is deliciously fascinating.

Visitors will watch how this delicious nut is processed and packaged. The nut is first husked and carefully dried; then it is roasted to perfection, afterward, it is hand-dipped in chocolate or other flavorings then packaged…right before your eyes! An added bonus is the chocolate demonstrations and, of course, the free samples.  The gift shop offers a delightful selection of Mauna Loa products that are found nowhere else. If you don’t want to take the items you purchase with you, no worries, you can have them shipped! 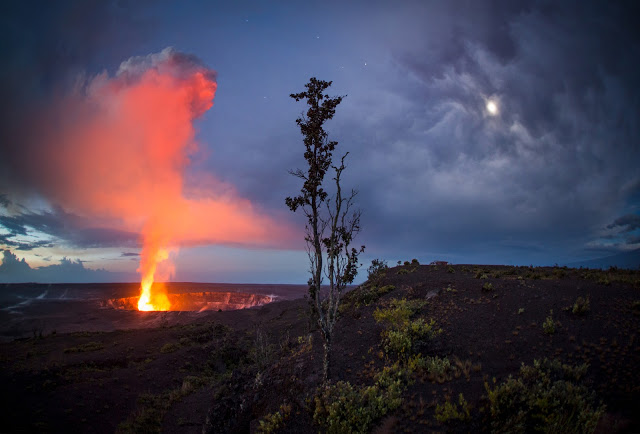 A must see for any visitor to The Big Island is a trip to Volcanoes National Park that encompasses the Kīlauea and Mauna Loa active volcanoes. The Crater Rim Drive is unforgettable as it wends its way over stark lava fields and passes steam vents that cloud the tropical air.  When conditions permit, a drive to the “End of the Chain Road” offers visitors the opportunity to view excellent examples of the slow advance of lava across the coastal plain. Since 1986, lava has flowed repeatedly over this road increasing the acreage of the park by nine miles and hundreds of acres. 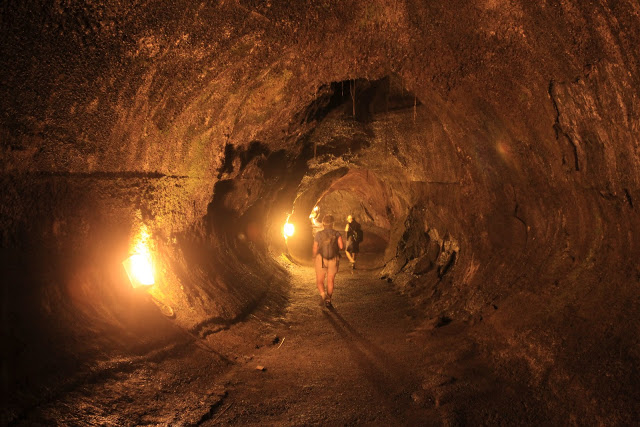 In the park itself, the Jaggar Museum tells you all you need to know about the geology of this area.  There are volcanology exhibits, maps, and a 25-minute award-winning video, “Born of Fire, Born of Sea” that is shown throughout the day. The best view of the steaming Halema’uma’u Crater is steps away from the museum.  A highlight of this visit is the 20-minute walk through a lush tree fern forest where an illuminated pre-historic cave-like lava tube awaits exploration. Even though the Thurston Lava Tube (Nāhuku) is lit by electric lights, bring a flashlight to see the shapes and colors of minerals leeching from the rock. The main part of this lava tunnel has a flat rock floor and a ceiling height in some places of more than 20 feet. There is another segment of the tube that is completely dark with an uneven floor that should only be explored if you have a strong flashlight and are sure-footed! 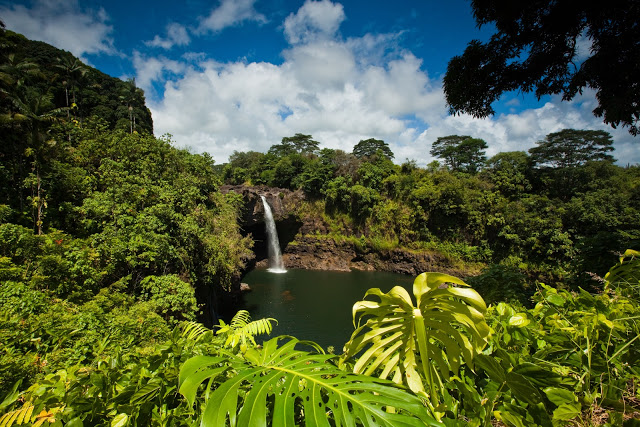 Surrounded by artfully shaped mango trees, the easily accessible Rainbow Falls is another must on the Big Island circuit because it presents an easily accessible picture-perfect photo opportunity. A trail gives hikers a birds-eye view of the falls. Look for the alcove behind the base of the falls which was believed to be where King Kamehameha buried the bones of his father. Another legend claims that Hina, mother of Maui, lived in this alcove. 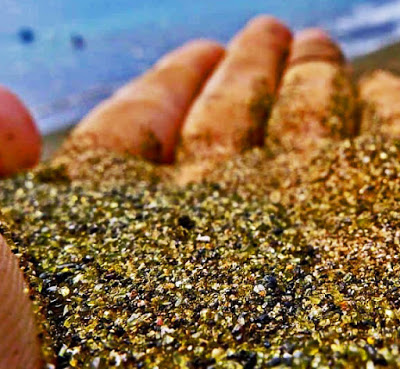 A not to be missed stop in Hilo is the famous Richardson Beach Park. The sand here is actually a combination of black lava and green sand. The green sand is made of olivine crystals that formed during an eruption of Mauna Loa more than 49,000 years ago. This is one of the few green sand beaches in the world; the other three are in Guam, the Galapagos Islands and Norway. 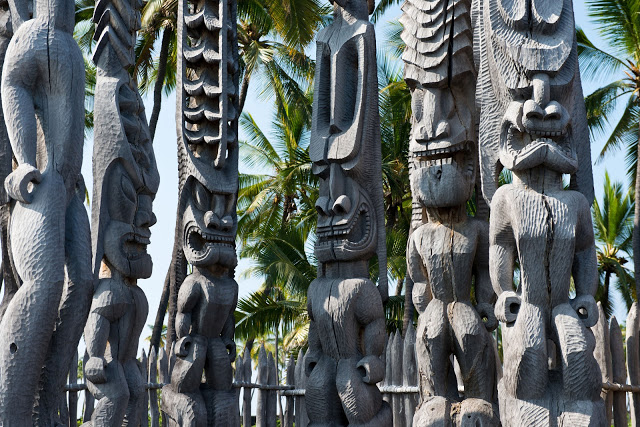 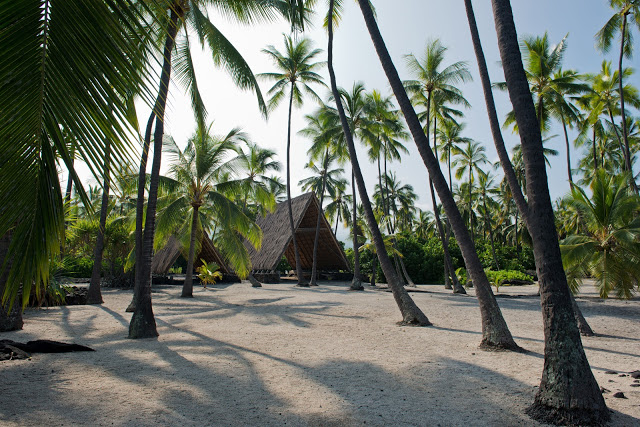 The next stop on The Big Island is in Kona. Here you will take an evocative excursion into the distant past of Hawaiian culture as you explore the tranquil grounds of Pu’uhonua o Honaunau. The Pu’uhonua offered more than physical protection because it was regarded as a sacred place of supernatural power in ancient Hawaiian times. This Pu’uhonua is the last remaining historical “place of refuge” on the Hawaiian Islands. Visitors are greeted by gigantic Kii statues that tower over the bay guarding the sacredness of this land. It was here that lawbreakers sought refuge and could find forgiveness, no matter what the crime, and where warriors came to be healed, and where women and children found a safe haven in times of battle. 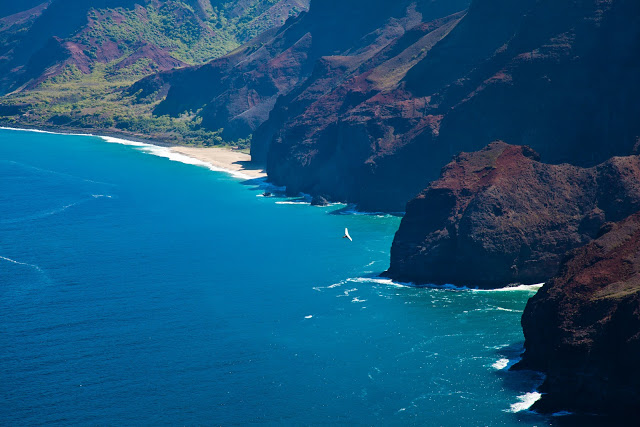 This walled refuge has well-maintained trails that lead to archaeological ruins that include the Great Wall, the Royal Grounds, and a sacred temple. Surrounded by fish ponds and a variety of traditional structures, the Royal Grounds was once the home of the chief of Kona. Here you can play a game of papamu, a traditional game played by royalty that is similar to checkers.  A visit to this park at sunset affords stunning views of the Pacific Ocean. 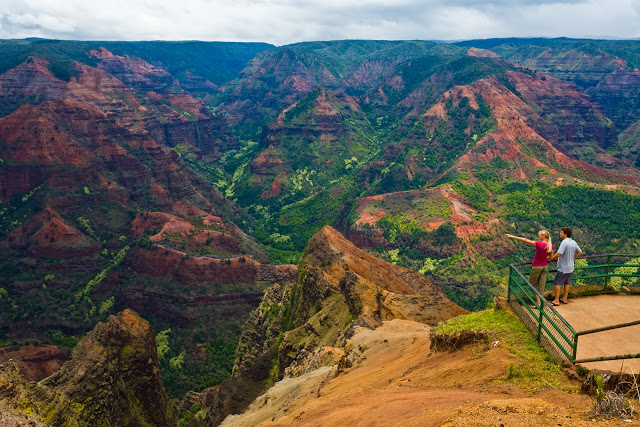 The last day of the cruise brings you to the magical island of Kauai nicknamed the “Garden Island.” Kauai is the oldest of all Hawaiian Islands and, proudly wears a distinctive regal mantle of tropical foliage that is punctuated with jagged cliffs, cascading waterfalls and emerald valleys. The spectacular natural beauty of this island is undeniable. Your first glimpse of the ruggedly beautiful Napali Coast lined with cliffs up to 3,000 feet tall and accented with lush emerald green valleys, waterfalls that plunge into the ocean and sea caves is - simply breathtaking. 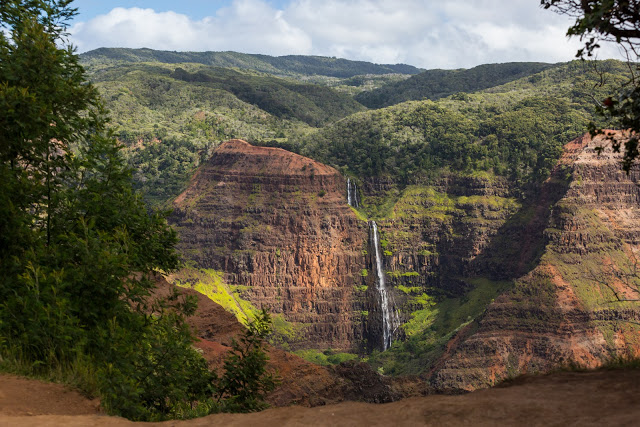 A visit to Waimea Canyon, known as the Grand Canyon of the Pacific is one of the highlights of the day – there is nothing else in the islands quite like this geographic marvel. Sweeping views and rolling valleys dip more than 3,600 feet into the earth – and the views…spectacular. This gorge is 14 miles long and a drive through it is amazing.

The name, Waimea is Hawaiian for “reddish water,” this canyon gets its name from the color of the rocks as well as the tint the water takes on when running through it. Afterward, explore Waimea Town, Hanapepe Valley, Port Allen and Old Koloa Town, the sight of Hawaii’s first sugar plantation. 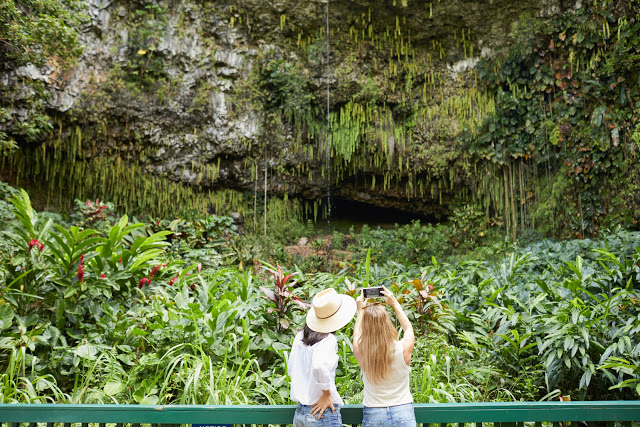 Rivers are rare in Hawaii and those that you can navigate are rarer still. A hidden gem in Kauai is a cruise to Fern Grotto.   Guests will listen to legends of ancient Hawaii as they cruise inland, away from the Pacific Ocean, and into a tropical rainforest on the Wailua River to Fern Grotto, that is only accessible by boat. 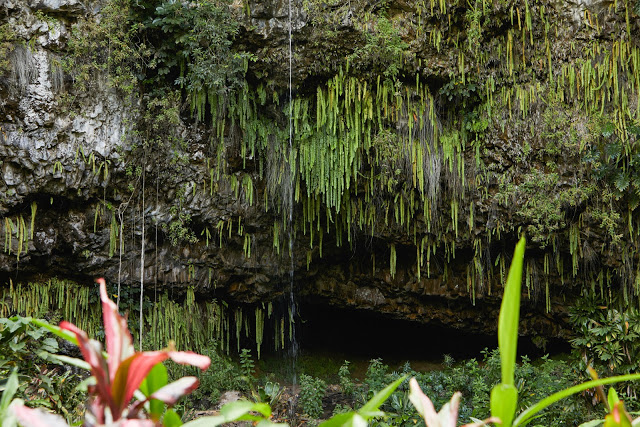 This is a natural lava rock grotto with hanging ferns in every shade of green imaginable punctuated with colorful tropical flowers and cooled by the mist of a waterfall. The river’s fresh water pours down from Mount Waialeale, that averages 450 inches of rain a year making it one of the wettest spots in the world, and this rain makes this river trip possible…and impossibly unforgettable.

Tours of Distinction is offering a fabulous cruise excursion departing from Oahu to the fabled South Pacific Islands of Maui, the Big Island (Hawai’i), Kaui and Oahu January 17 -27, 2019 that includes:

This tour includes two nights at the Hilton Waikiki Hotel (two breakfasts and an award-winning Luau Dinner), and seven nights on NCL’s Pride of America with all meals.  This has been voted as the #1 Hawaiian cruise for 12 years in a row.