Many consider Florence, Italy the cradle of Western Civilization between the Middle Ages and the Renaissance. The heart of this city’s artistic heritage can be found in its’ churches and museums. At every turn, Florence bears witness to the inspirational role it has played in the artistic history of this city through the centuries. Despite modern additions and alterations, Florence still looks like an early Renaissance City that many of its’ builders and artists from that time would recognize. 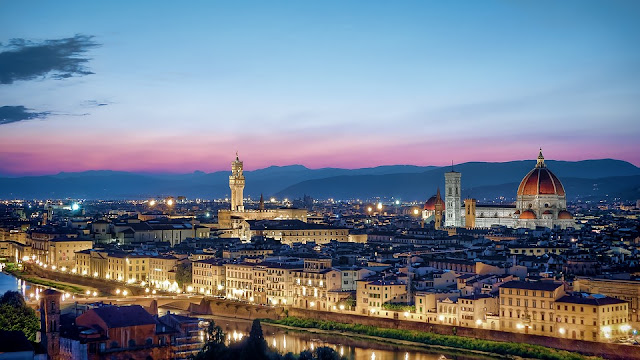 If you have limited time it is best to concentrate on one or two of the most historic and iconic treasures found here. Rising above the many masterpieces found in Florence is the Duomo, a landmark that has defined this city for centuries. 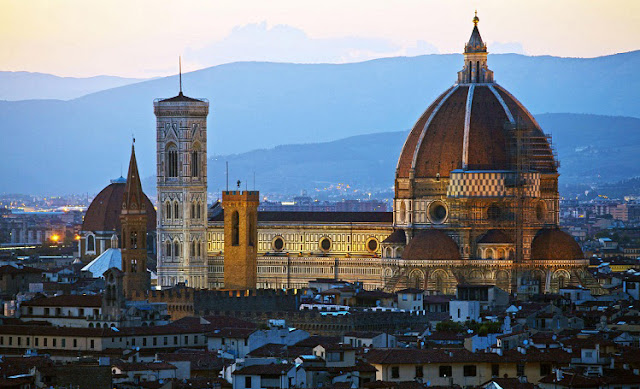 Things to know - Duomo Santa Maria del Fiore Cathedral
Perhaps the most iconic landmark of Florence is the Santa Maria del Fiore cathedral, simply known as Duomo. Located in the heart of historic Florence, the richly textured Duomo with its terracotta tile dome can be seen for miles. Construction on the exterior of the cathedral was started in the 13th century by Arnolfo di Cambio. The dome, an architectural wonder that is considered to be one of the most important achievements of the Renaissiance was created and designed by goldsmith Brunelleschi. Construction began on the dome in 1446 and finished sixteen years later using approximately 8,000,000 bricks and dozens of workers. 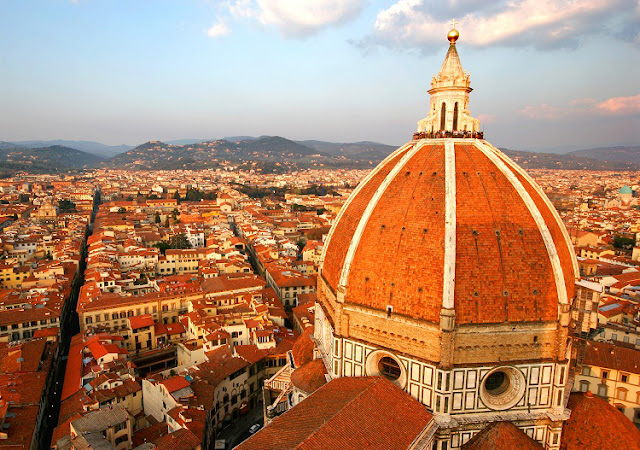 At 150 feet in diameter, it is the world’s largest brick-vaulted dome that was created without flying buttresses or any other supports. Brunelleschi’s innovative dome is held together by a ring and rib system that supports inner and outer shells made of bricks laid out in a herringbone pattern that included a horizontal stone chain. This new innovation reduces stress and allows the weight of the dome to be distributed evenly. In 1466 a gilt copper sphere with holy relics was added and between 1572 and 1579,  the biggest fresco of the Last Judgement was painted on the inner shell of the dome by students of designer Giorgio Varsari. The Duomo is 502 feet long, 296 feet wide and 295 feet high. It was the largest church in the world until Saint Peter’s Basilica in Vatican City was completed in 1615. 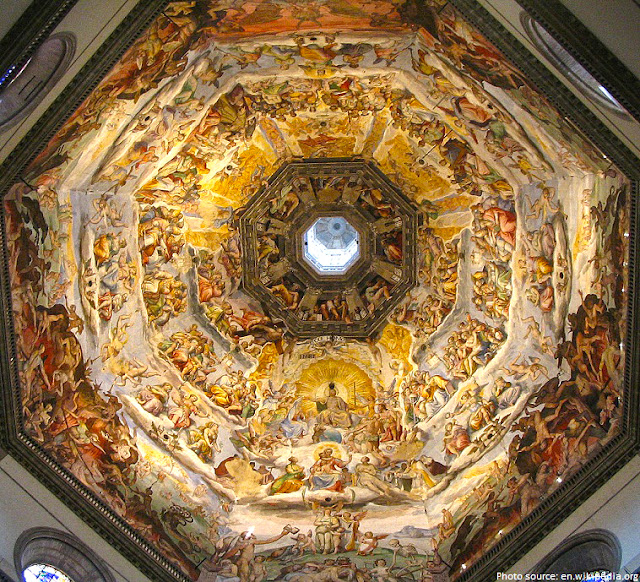 The exterior of the cathedral was not completed until the 19th century. It is covered with a mix of pink, white and green marble. In contrast to the exterior, the interior of the cathedral is quite stark. Of special interest inside are the mosaic floors, stained glass windows and, frescos including those alongside the left nave: Dante Before the City of Florence by Domenico di Michelino dating to 1465. 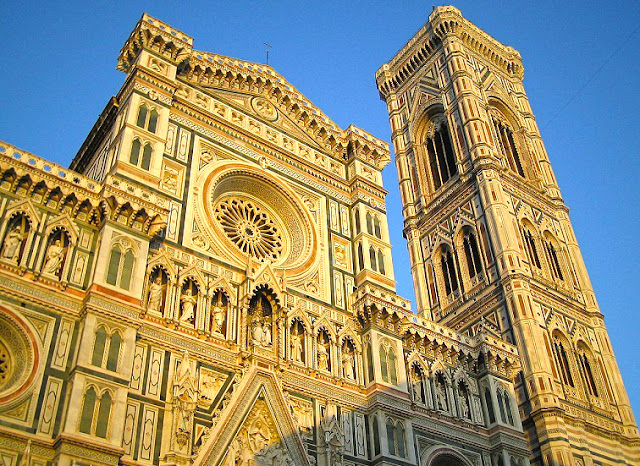 For a wonderful view of Florence reserve tickets to climb the dome. This is the only way to see the work of Brunelleschi’s artistry up close. There are 463 steps, mostly in narrow corridors that were once used by workers during the construction of the dome. Once you reach the dome you are rewarded with a close-up view of The Last Judgement and fabulous views of Florence. To book tickets click here. If you don’t like heights or are claustrophobic, this walk is not for you. 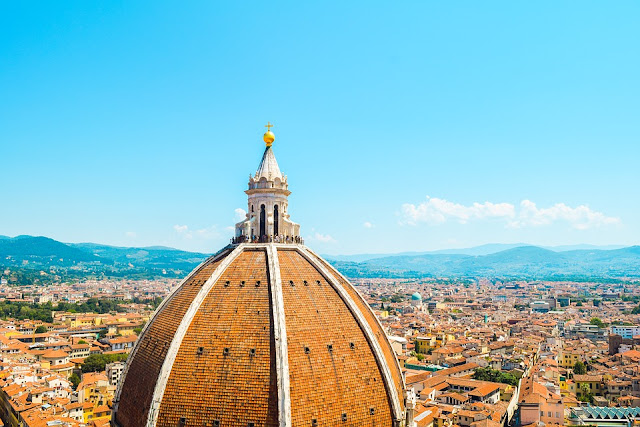 Saint John’s Baptistery is part of the Duomo complex that is located in front of the cathedral. This is one of the oldest buildings in Florence with construction beginning in 1059. The octagon-shaped interior is richly decorated with mosaics from the 1200s. Don’t miss a photo in front of the exterior bronze doors, dubbed the “Gates of Paradise” by Michelangelo that depict scenes from the Bible that were designed by Lorenzo Ghiberti. 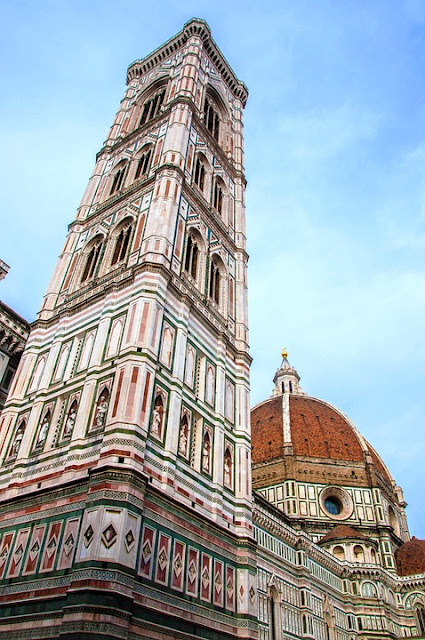 Next to the Baptistery is the bell tower or Campanile that was designed by Giotto in 1334 and finished in 1359, more than two decades after the designer’s death. After climbing the 414 narrow steps to the top of the bell tower, visitors are rewarded with a panoramic view of Florence and the surrounding countryside. The view of the dome is especially good from this location. 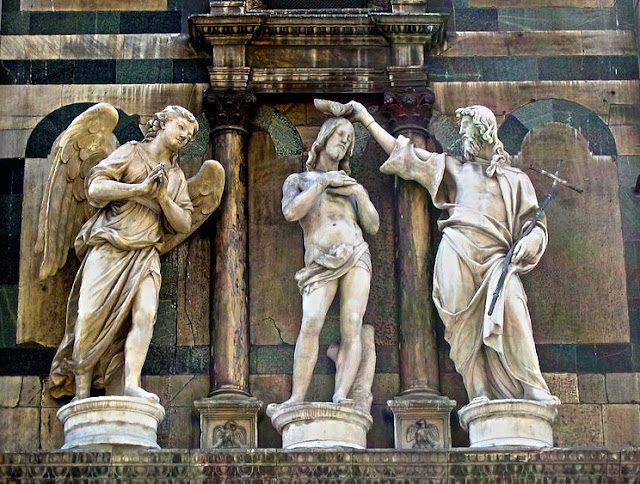 Save time for a visit to the Museum dell’ Opera del Duomo that is known as OPA. This is the Cathedral’s workshop whose main mission is to conserve the monuments of this complex and to house them. Here visitors will find fascinating exhibits about the design and construction of the Duomo and Baptistery and more than 1,000 artworks set in 25 rooms by master artists such as Michelangelo, Donatello, della Robbia, and others. 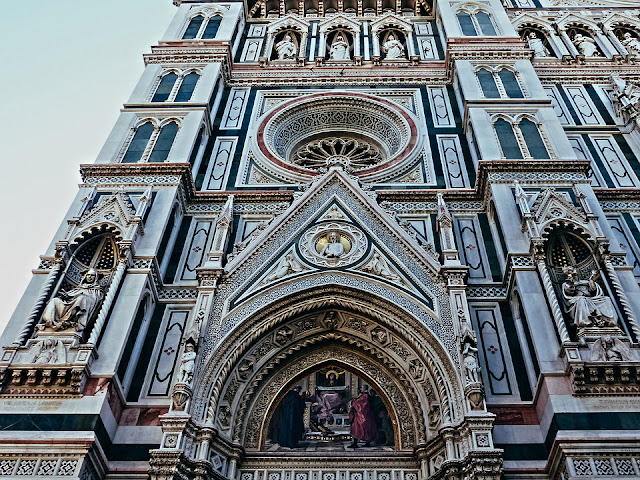 Fun Facts… did you know…

The dome is one of the most important achievements of the Renaissance that is still one of the largest in the world. It was designed by a goldsmith!

In 1420 Brunelleschi was officially named the superintendent of the Duomo project. The overseers of this project didn’t trust Brunelleschi so they appointed his arch-rival, Ghiberti, the architect of the bronze doors of the Baptistery as his co-superintendent to keep him in line.

Brunelleschi was a true Renaissance man with a great variety of interests from working with precious metals, studying wheels and gears to studying ancient monuments. It is said that the inspiration for the Duomo comes from the Pantheon and from the feast room of Nero’s Palace that was described in detail by Suetonius.

The name of the cathedral, Santa Maria del Fiore was named after the symbol of the city of Florence the lily - Fiore in Italian means flower.

Brunelleschi invented an ox-powered crane during the construction process of the dome to help lift and lower the blocks of stone.

One of the must-try dishes in Florence and a favorite of the city to this day, is Peposo beef stew. This stew was introduced from the Tuscan town of Impruneta to Florence by Brunelleschi to feed his workers! This peppery beef stew is one of the most authentic and traditional dishes you can enjoy in Florence.

For information about our tour to Italy, Tuscany to Amalfi visit todct.us/TuscanytoAmalfi.