Ireland is known worldwide for its’ enchanting beauty… rugged cliffs and heather strewed bogs, the spectacular seaside coastline, emerald lakes, and its’ undulating unspoiled countryside. Because of its natural beauty and the variety of its terrain, Ireland has been a popular place to film movies and tv shows for decades. An added bonus when touring Ireland is to see many places where some of our favorite films have been shot…places where selfies are definitely de rigueur!

The Cliffs of Moher are one of the most iconic destinations for visitors and residents alike. As you stroll along these famous rocky crags think back to movies like the Princess Bride, Harry Potter, and the Half-Blood Prince, Ryan’s Daughter, Far and Away, and Into the West. All these classic films were shot in this stunning location.

Grafton Street in Dublin, a city that is cited as the third most friendly in the world has been a mecca for movie and TV producers for years. Grafton Street is the soft-focused backdrop for John Carey’s 2007 film, Once, about two struggling musicians in Dublin.  The popular film, The Tudors was filmed in a variety of locations including Dublin Castle, and Christ Church Cathedral, while the beautiful grounds of Dublin’s Trinity College was the location for filming scenes in Educating Rita. Dublin’s Kilmainham Jail was used in The Tudors, Michael Collins, The Italian Job, and The Wind that Shakes the Barley. The famous Temple Bar in Dublin was used as a film location in Far and Away to represent Boston!

Set against the backdrop of the Maamturk Mountains and the grey water of the Killary Harbor, The Field, the 1998 Oscar-nominated film starring Richard Harris and John Hurt was filmed in Leenane and Ashleigh in County Galway. The Quiet Man starring John Wayne and Maureen O’Hara was almost entirely shot in the Connemara village of Leenane which is known for its wet and misty mountains. The field itself is located six miles outside of Leenane on the right-hand side of the road to Westport, beside a little bridge, and the movie’s famous fight scene between Bull and his son was filmed at Aasleagh Falls on the Erriff River. 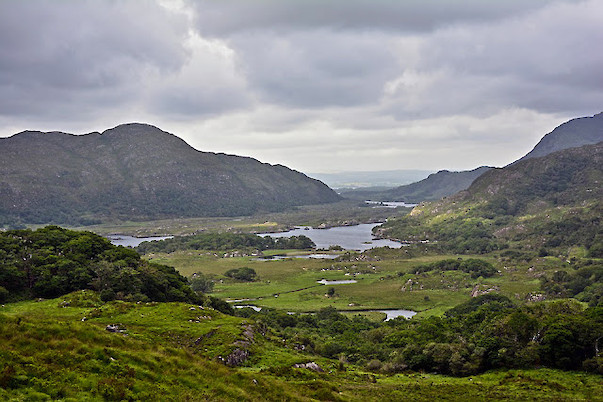 Powerscourt Estate is iconic and often referred to as Ireland’s country garden because of its 47 acres of formal gardens, sweeping terraces, statues, and ornamental lakes. Wandering these idyllic grounds it is not surprising that over 25 different movies and TV series have been filmed here. Some of the more memorable movies include Black Beauty, The Count of Monte Cristo, King Arthur, Far and Away, The Tutors,  Into the West, and David Copperfield.

Ireland’s Dingle Peninsula has offered a treasure trove of landscapes for film producers since the 1930s. There have been five major motion pictures shot here including Star Wars - The Last Jedi, Far and Away, Ryan’s Daughter, Playboy of the Western World, and Song of the Sea. Inch and Coumeenole Beach, Dun Chaoin, Slea Head, and Clogher Head were all film locations for Ryan’s Daughter. Ventry Beach was the inspiration for the children’s animated film Song of the Sea and Inch Beach was used as a location in Playboy of the Western World. Star Wars was filmed in several locations including Slea Head and Ceann Sibeal. 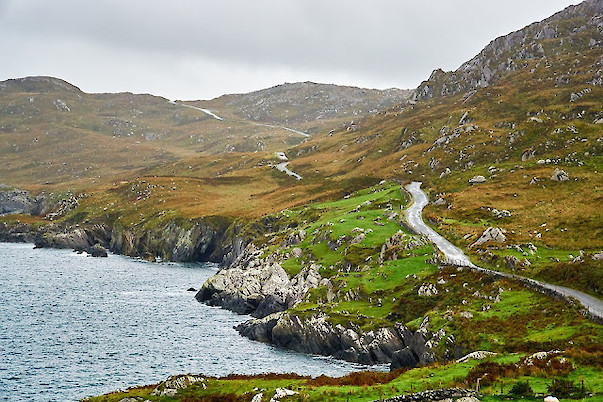 Achill Island in County Mayo is the largest island off the coast of Ireland. The landscape has been described as mesmeric because of its rugged wild beauty. The film Love and Rage was shot on location at the historic Valley House and at various locations on Achill Island. The film is based on the true story of Agnes MacDonnell and James Lynchehaun and the events that occurred at the Valley House in 1894.

On our tour, Ireland Uncovered you will see many of these iconic film locations in addition to many other cultural and historic attractions that make this trip truly amazing.  Get ready to roll out with us to Ireland, and don’t forget the popcorn! For tour information click here.